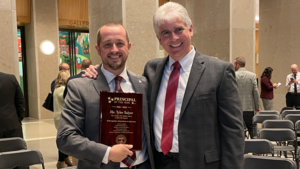 The Tennessee Department of Education announced the 2021-22 Tennessee Principal of the Year Award at the annual Excellence in Education celebration Thursday evening and West Collierville Middle School Principal Tyler Salyer was one of two Tennessee principals to earn the honor. Salyer was one of nine regional finalists for the outstanding recognition.

“This is an incredible honor for not only Mr. Salyer, but for Collierville Schools as a whole,” stated Dr. Gary Lilly, Director of Schools. “We have an incredible group of educators in our district. Principal Salyer earning this award is not only a tribute to his leadership, but also a reflection of the hard work our staff puts in day in and day out to provide the best education for Collierville students.”

"I'm so humbled and honored to be recognized with this award,” said Salyer. “Over the course of my life I've been blessed to have so many people mentor and support me on my journey, and I hope I do the same for others. This award belongs to all those who I have had the honor of working with throughout my career.”

Salyer won the award with Dr. Chris Hampton of Dobyns-Bennett High School. This was the first time both the Tennessee Principal of the Year and Tennessee Supervisor of the Year awards were so close that two outstanding educators were selected for each award.