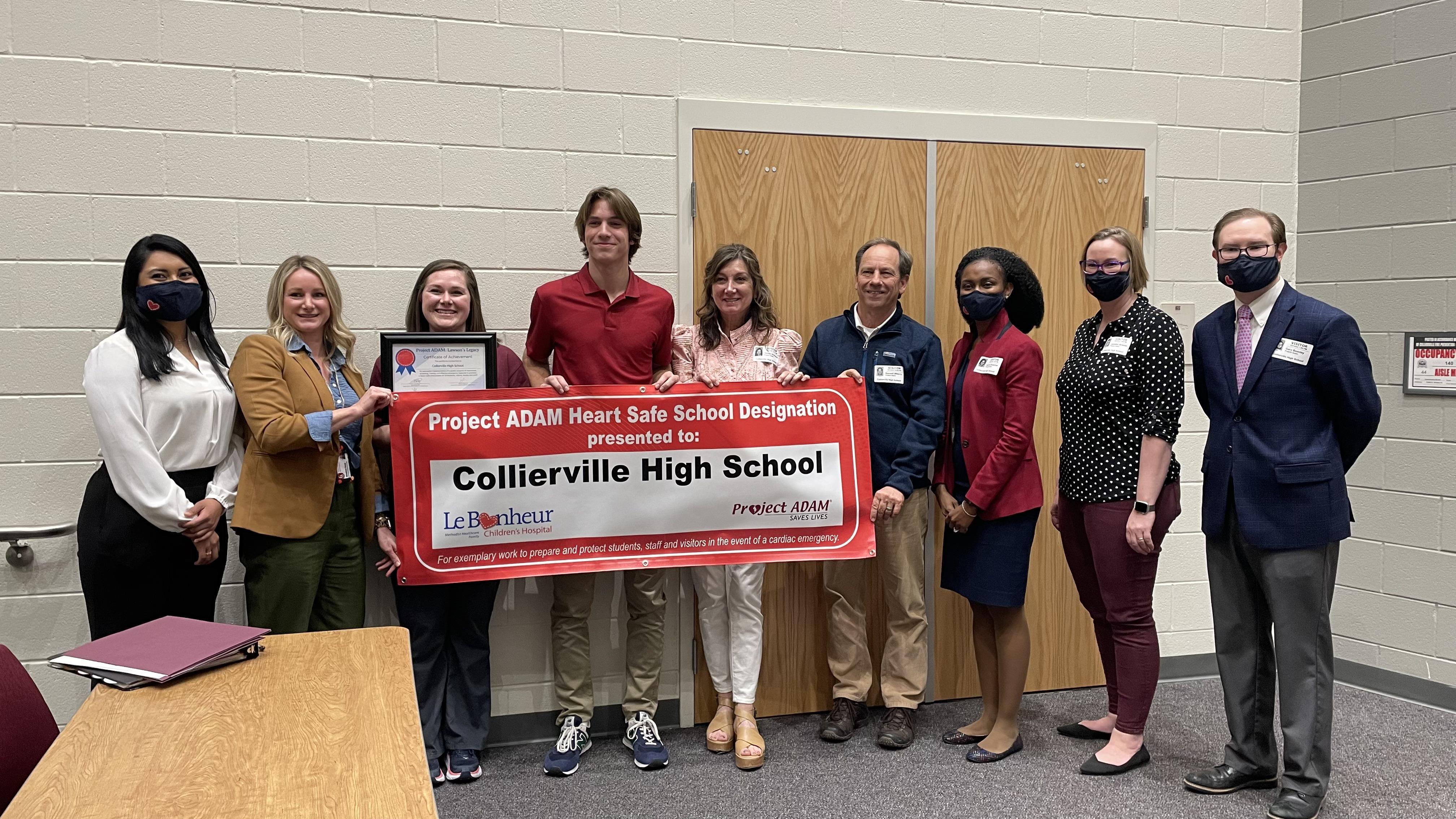 COLLIERVILLE, Tenn. (February 15, 2022) – On Monday afternoon, Collierville High School became the first school in West Tennessee to earn the Project ADAM Safe Heart School Designation. Doctors and representatives from LeBonheur Children’s Hospital in Memphis were on the campus of Collierville High School to tour the AED locations in the building, as well as evaluate an AED drill conducted by the CHS AED Team.

Project ADAM began in 1999 after the death of Adam Lemel, a 17-year-old Whitefish Bay, Wis., high school student who collapsed and died while playing basketball. Adam suffered a Sudden Cardiac Arrest (SCA), in which ventricular fibrillation occurred, a condition in which the ventricles cannot pump blood into the body. Defibrillation, or an AED, could have saved his life. Adam's parents, Patty Lemel-Clanton and Joe Lemel, collaborated with Children's Hospital of Wisconsin’s Herma Heart Institute to create this program in Adam's memory.

The Project ADAM Designation is especially important to one CHS student, Charlie Jones. Jones, a senior soccer student-athlete prepared to attend Rhodes College next year, has played an instrumental part in securing the AED at the soccer complex. Although CHS had three AEDs stationed throughout other areas of the athletic complex, Jones drew up a proposal to have a fourth installed at the soccer complex due to the amount of time it would take to retrieve one in the event of an emergency.

Jones’s family also experienced a similar event to the Lemels’ when his cousin, Lawson Wherry, went into sudden cardiac arrest. Had an AED been available at his location, it quite possibly could have saved his life. Jones has played a major role with Lawson’s Legacy and LeBonheur Children’s Hospital and continues to be an advocate for AEDs and raising awareness of the signs of cardiac arrest.

Collierville High School is equipped with a total of eight AEDs, four inside the building and four distributed throughout the athletic complex. School nurses and administrators prioritize placement of emergency response teams in strategic locations on campus in order to provide quick response times. AED drills are conducted each year to ensure preparedness in case of a cardiac emergency.